You don’t have to drive many minutes from our shop to realise that you’re in the heart of game country here in Somerset.

From the wildfowl on the Somerset Levels to the pheasants you’ll see in fields everywhere to the wild red deer roaming the Quantock Hills there is a fantastic array to admire – and eventually eat.

Game cookery used to be the preserve of the wealthy because it was the wealthy who mostly reared game. Game birds and animals could only be shot in their proper season and the penalties for anyone caught illegally taking game out of season – or on land they didn’t own – were really severe, including transportation to the colonies and even hanging.

Equally, a lot of myths were woven about cooking game, partly to put the lower orders off the idea of trying. Pheasants, for instance, were said to be fit to eat only once putrefaction had set in. Venison was held to be incredibly difficult to cook at all.

All of it of course, utter nonsense. And we’re delighted to be part of the great British food revolution that has seen thousands of families turning to the game sector in the last few years as the source of healthy, nutritious and delicious meat.

There is no mystique about cooking any of it. Anyone can turn pheasant, partridge or pigeon into a delicious meal. Venison is simplicity itself to cook. And if you still have any doubts you can turn to our easily-to-follow recipe section for ideas and advice.

There’s also the misleading reputation that game has for being expensive. It isn’t. While it may not be the sort of thing you want to eat every day it’s certainly affordable. A pheasant, for instance, will cost you far less than a chicken.

And think about venison: a healthy, low-cholesterol meat with no fat to trim away and absolutely nil waste: so lean, in fact, that a roast venison joint will need to be liberally barded with fat to keep it moist during cooking.

Of course not everyone will want to plunge in and invest in a venison joint for their first foray into eating game. So let us help you get acquainted. We can offer venison sausages and in particular our outstandingly good venison burgers which everyone who tries them tells us are absolutely irresistible.

Venison sausages casseroled in red wine, garlic and shallots with a spoonful of blueberry jelly for added flavour? What could be tastier or easier than that?

All game is subject to seasonal availability, of course, but generally starts to appear in the shop in early autumn – the very best time of the year, the experts will tell you, for eating venison from animals which were born the previous year.


Speak to us, as always, about any special requirements you have. We’ll be more than delighted to help. 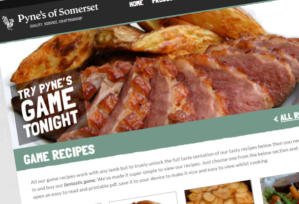 Need some inspiration? Just head over to our recipes page. We have plenty of great ideas on what to cook with our game!