When we collected the South of England sausage championship for the second successive year our competitors asked us what was the secret ingredient we relied on. We told them: meat.

And that was a totally honest answer. Because while we may add flavourings to our sausages – our prize-winning and top-selling Proper Job variety, for instance, contains apple, sage and cider – fundamentally it’s the quality of the pork that makes all the difference.

And for our sausages we use precisely the same pork as we sell as cuts and joints. In other words the best for miles around. So perhaps that secret ingredient should really be ‘localness’.

You are never going to get great results from sausages by using inferior ingredients. And if you’re still not convinced then try this simple test. Take one of our sausages and a supermarkets standard one and cook them side by side under a very low grill. The process will take probably half an hour but the result will speak for itself.

You will in almost every case find the supermarket sausage has shrunk inside its casing, that it’s sitting in a pool of fat and that even more fat can be squeezed out of it. Ours, on the other hand, will hardly have shrunk at all and certainly won’t be lying in a fatty bath.

That’s the difference. That’s why we make and sell more than 12,000 sausages a week – enough, laid end to end, to stretch well over a mile into Bridgwater.

Sadly the reputation of British sausages is only just starting to recover from the war and the post-war austerity years when they were regarded as a bad joke because almost anything was shoved into them to bulk them up.

But the last three decades have seen a huge revival in the traditional, premium British sausage –and even foreigners no longer laugh about them. And as repeat trophy winners we’re proud to be out in front of the competition. 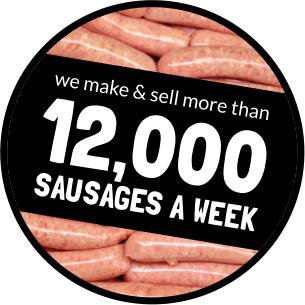 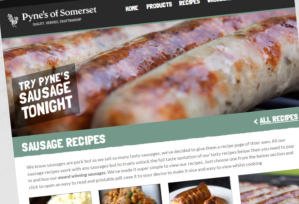 Need some inspiration? Just head over to our recipes page. We have plenty of great ideas on what to cook with our sausages!

You’ll find just as startling a contrast between our bacon and what you may pick up in one of the multiple retailers. Ours is home-cured using an entirely natural process that has been employed for centuries and which features another not-so-secret ingredient: time.

Modern curing methods speed up the processing of pork into bacon by injecting it with chemicals – the chemicals which give you that nasty white residue in the pan and which often, in fact, prevent the bacon cooking properly and becoming crisp.

You’ll find none of that with our bacon. And if you’re after something more than a few rashers for breakfast then take a look at the bacon joints we always have in store. All prepared by the same traditional method and all ready to deliver really stunning flavour once cooked – and again there’s plenty of advice about this in our recipe section. 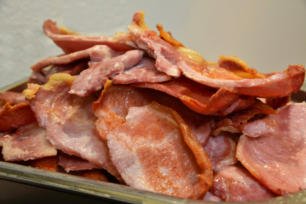 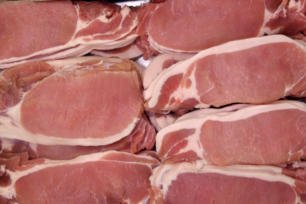